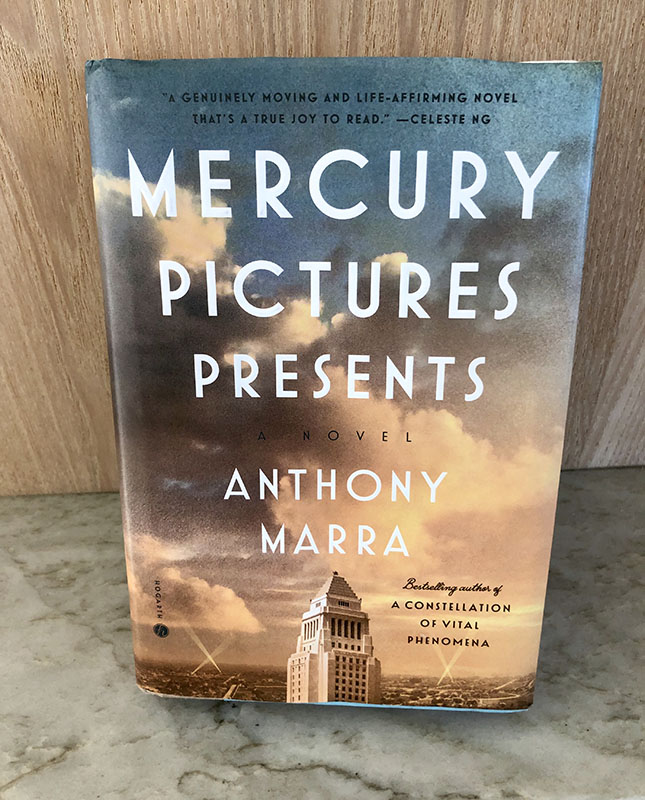 Take it from me – Anthony Marra is a kind, supremely smart, terrifically talented and earnest young man and writer.  He possesses other qualities I admire – patience and graciousness.  His patience and grace served him well when we were stuck together at the Aspen Airport waiting for a very delayed flight to depart for Denver.

I’d just heard him speak at 2018’s Aspen Summer Words Writers’ Conference about his novel in progress featuring a B-movie producer in 1940s Hollywood.  I worked up my courage, approached him and told him about my great-grandfather Sol who happened to be a major B-movie producer in 1940s Hollywood.  We spent about an hour geeking out together over World War II-era Hollywood history.  I’m afraid I talked his ear off.  Not often I meet someone who shares my interest in that time and place so a lot of verbiage tumbled out.  When I noticed his eyes glazing over, I apologized for taking so much of his time.  He graciously demurred, excused himself and scurried away to talk to another Aspen author stuck in the airport.

When I read about his Hollywood novel coming out last month, I ordered it right away and dove in.

Marra is a poetic writer with profound psychological insight.  Reading his prose is a joy.  That’s why I wish I could recommend “Empire Pictures Presents” without hesitation.  He does so much well in this book. His impeccable and wide-ranging research paid off with a detailed and accurate portrayal of the era’s global socio-political landscape from the rise of Facism to red-baiting.

His emotionally true evocation of the central character Maria Lagana’s relationship with her mother Annunziata hit close to home. Having raised three daughters, I marveled at how a youngish guy like Marra knows so much about the complex emotional range of mother/daughter relationships from the antagonistic teen years to the reconciliation of young adulthood.

He also  masterfully captured the Los Angeles vibe (likely informed by the years he spent in the belly of the beast as a USC undergrad).  Finally, his sensitivity to the frustrations of ethnic casting in Hollywood is personified through his well-drawn characterization of Chinese actor Eddie Lu (Maria’s love interest).  Marra explains the absurdity of typecasting brilliantly in this passage: “Though it appeared nowhere among the Production Code’s rules and regulations, studios strove to make ethnic characters more relatable to white America by casting them with actors who supposedly brought them one degree nearer to Anglo-Saxon: Chinese actors played Japanese characters, Jewish actors played Chinese characters, Catholic actors played Jewish characters, and Protestant actors played Catholic characters.”  Overall, so many wise insights and great stuff.

And yet, I wished for less rather than more.  My hunch is Marra became so enamored with all the fascinating nuggets his research unearthed he couldn’t restrain himself from throwing in more characters and facts. While interesting, these became TMI (too much information), distracted from the narrative arc and frustrated me.  All the temporal and geographical pinging around from the fictional landlocked town of late 1930s San Lorenzo, Italy where Maria’s beloved criminal defense lawyer father Giuseppe is a confino (political prisoner), to a Utah desert where the military employed Hollywood emigres to recreate Berlin for test bombing runs, to actual post-War 1998 Berlin, coupled with a cast of secondary characters that grew as the book progressed proved too much for my middle-aged brain to track.

Another possible cause for the book’s  discontinuity may be that Marra’s publisher passed him through three different editors – a case of too many sequential cooks in the kitchen.

Ned and Artie Feldman, the warring twin brother studio heads of Mercury Pictures, loosely based on Jack and Harry Warner struck me as the least fully realized of Marra’s characters – comic relief to the point of caricature (Artie’s collection of named toupees serves as a laugh line throughout).  On the other hand, Marra does a good job detailing the antisemitism the moguls faced and how the rising tide of Fascism threatened to drown them.  Artie  emerges as somewhat of a hero for confronting an antisemitic congressman during a public hearing and bucking sexist Hollywood convention by making Maria an executive producer.   Ned and Artie’s dialogue rankled me as inauthentic – too high-tone intellectual for scrappy, small town shtetl Jews who emigrated from Poland to the U.S.A.  Early moguls like my great-grandfather Sol Wurtzel (who was close to Harry Warner) were tough talking no BS types.  That’s how they survived.

Bottom line – if you like beautiful prose for its own sake, have a thing for Golden Age Hollywood  or adore World War II era historical fiction this book is for you. Otherwise, you just might lose patience.

Subscribe to my blog for hot takes on books by friends, strangers and NEW CATEGORY (coming soon) - family.
Also featured - breaking news on freshly published journalism and "Ghosts of Hollywood Past".